The estimated population of New York is over 19,297,700 with a workforce of approximately 9,519,300. New York is 3rd largest state in terms of population. In places like New York City, Albany, Buffalo, Rochester, and Syracuse, the demand for educated and trained New York computer forensics professionals continues to increase. 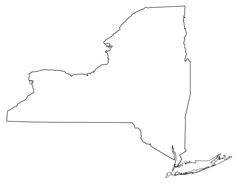 Even with the availability of campus-based programs in New York, online computer forensics degrees are a very popular choice for many individuals. With a busy lifestyle, earning your degree is made much easier through an online college, since you can earn your degree according to your schedule no matter where you may be. There are several online programs available.

New York is unique in that there are several campus-based options for earning a degree or certificate in the highly-specialized field of computer forensics. Broome Community College in Binghamton and Tompkins Cortland Community College in Dryden both offer associates programs related to forensics. Broome offers an associate’s in Computer Technology/Security Forensics, and Tompkins Cortland offers an associate’s in Computer Forensics. Medaille College in Buffalo offers a bachelor’s in Criminal Justice/Computer Crimes Investigation. Utica College in Utica offers a bachelor’s in Cybersecurity and Information Assurance and a master’s in economic crime management. Finally, John Jay College of Criminal Justice in New York City offers a master’s in Forensic Computing.

When it comes to standard operating procedure in computer forensics, every state has its own laws and procedures. Currently, New York is operating with regards to the Federal Rules of Civil Procedure Amendments. There are no additional state laws or statutes on the books in New York concerning computer forensics or data recovery*.